Day 6 of the build was another one of the so called “big days”, where the aim was to complete the day with the prop shaft and differential fitted, and with no injuries entailed.

Craig popped over again to assist, as this assembly stage is definitely a two-man job.

I’m now building a little out of suggested build sequence, as I haven’t finished the front end from a radiator, oil cooler and fluid pipe work perspective, but I chose to do it this way around because of Craig’s availability, and also my urge to do something big and not tinker, as the Day 5 was a “small jobs” day.

Once I had located the clevis and split pins, which were in different bags – hint the split pins are hiding in the fixings bag for the handbrake bolts, but the clevis bolts and pulley wheel (or mine at least) were in the lighting box, illogically…

With an SV, you don’t put a twist in the cable, just leave it as a large loop. It was a very simple task, but I had to enlarge the lower hole for the large clevis pin that fits through the pulley wheel, as it was out of alignment. A round file did the trick.

The handbrake knurled wheels to tighten eventually fit really tight to the front of the diff, I hope it’s easy enough to adjust later in the build. 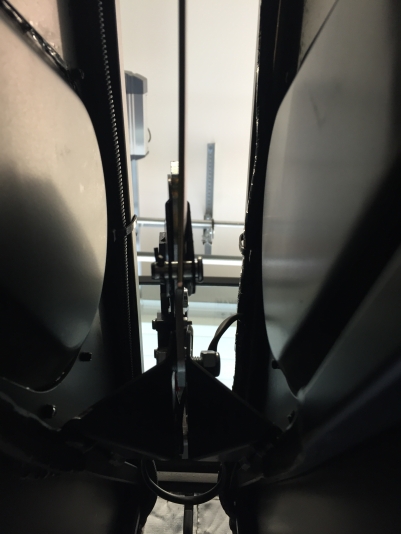 So long as its inserted from the rear end high enough up, and rotated a little on insertion, the prop shaft fits down the tunnel, but it was snug during the “push through”. It slipped immediately into the end of the gearbox mounting, splines mating perfectly.

I was concerned about pulling the cover off the end of the gearbox because the Mazda 5-speed is pre-filled with oil, which surprised me during unpacking when I had a nosey and a little oil gushed out. In fact Caterham don’t provide any other gearbox oil, as its not not a requirement to fill.

So I was ready with my oil drip pan just in case, but mounted in the car and with the rear end slightly higher on the axle stands (left it that way after engine insertion), the gear box did not leak any more oil and fitting was a 5 second job.

So now the challenge of the diff. Yep, it’s fairly heavy, yep, you don’t want to be lying underneath it if it falls off your jack as you raise it. But other than those safety warnings, it wasn’t too difficult. To give us more height we sat the diff on a piece of wood on the jack and slowly raised it into position. Then jammed a very long and heavy duty screwdriver through the top mounting hole and diff as it aligned. 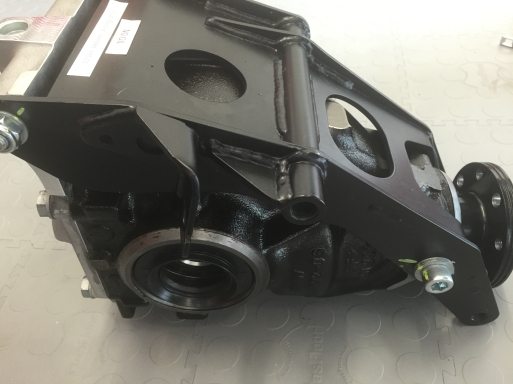 This meant we could then tweak the height of the diff with the jack without fear of the diff falling. Once the bottom holes were aligned I inserted pre-copper slipped bolts with 2 spacers on each side. No messing, no issues, no mallet needed.

At this point I measured from the bottom side of the diff bracket (as it was symmetrical, and the diff case isn’t) to the box section rear hole point where you mount the rear ARB.

The measurement showed I was 4mm closer to the RHS, so I switched the spacers over to be 3 on the RHS and 1 on the LHS. Re-measured and got exactly the same on each side…perfect.

Then onto the top bolt, which came pre-chamfered. Again Copper Slip everywhere and I fiddled around with spacers. My diff needed 5 spacers on the RHS and 1 on the LHS. I couldn’t get any more in, and i knocked these in by sticking them together with copper slip, and then pushing them in with the flat blade of a screwdrivers.

It was really satisfying getting it all together and then final torquing and paint marking the bolts. In other folks builds the diff comes with BMW caps over the drive shaft holes, and people have reported that you have to knock these off and throw them away. With my diff, these caps were not present, so one less thing to do 😉

4 bolts are required to fit the prop shaft to the diff, and to do this you have to slide the prop out of the gearbox a little, and make sure that you aligned the 4 (out of 8) holes on the diff side that are threaded. Insert bolts from the gearbox end backwards and tighten to the correct torque. One of these was a problem because I couldn’t get my socket onto it because of the placement of the grease nipple around the CV joint. In the end I felt the torque on the other 3 bolts and gauged it on this final one. Its either the same or very slightly tighter, and that’s fine. Trusty paint pen got a lot of use today, marking up all of these bolts to make it easier to spot any future issues. 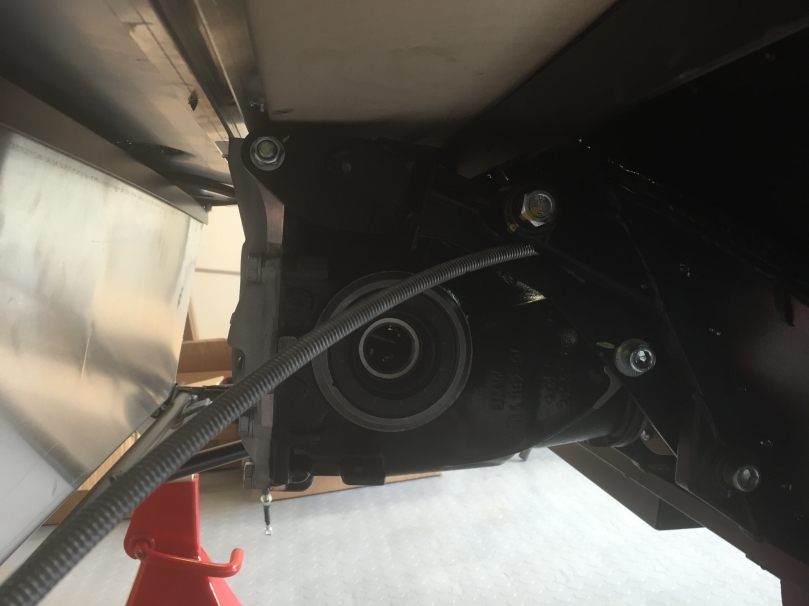 The joy I feel at key points in the build is still rather special. I have no specialist skills, I have to read things through a bunch of times and play through in my head how things may go. But all of this is fine. Its a really good “focus” job and all of my other worries (which are work related) just dissipate.

My wife reports that I walk into the garage with a frown, and I leave with a smile….

Have a nosey into the diff: