I’ve really enjoyed everything about the build. I started off not sure how hard it would be, or even whether I was capable, being an IT geek as opposed to a mechanic. The reality is that anyone with a basic understanding of cars and a spanner can achieve this.

And it’s massively rewarding, one of the most enjoyable things I have ever achieved, and a learning journey along the way. The build guide is shortly being updated to be more detailed, with much better exploded diagrams and instructions. But I don’t mind one jot.

I posted on BlatChat that actually the challenge of deciphering the instructions is part of the fun. If it was too easy, then it would be less rewarding. To encounter a sub assembly in the guide and not have enough pictures, alongside tragically badly written text is reason to communicate with others who have been, or are on, the same journey and forge new relationships.

I took 14 days, simple as that. My days ranged from 5 hours to 10 hour long slog-athons, but on average I worked a 7 hour day. Didn’t want to kill myself, or never see family or friends during. I therefore took 98 hours from start to finish, although I still haven’t processed the GoPro photos I took automatically every 60 seconds – this will be the most accurate recording of elapsed time.

Currently there are 3 others that are building (or have just built) pretty much identical cars. Each of them have added to my fun, and I hope they feel the same.

In no particular order, I call out:

Derek Clarke, a chap I met very randomly at the AutoSport show in January, on the Racelogic VBox stand. He was asking questions about fitting a VBox to a new build Caterham, I was stood right behind him dreaming of the same, my ears pricked up and I introduced myself. Turns out that his 420R kit was arriving around the same time as mine. We have helped each other out a bunch of times via email, and I know that he has been reading my warbling diatribe here. Thanks Derek, and all the best completing yours!

Dan Smith, met on Facebook, new to Caterham’s, and therefore at the time not event a L7C club member or had probably even heard of BlatChat. Someone who actually knows what he is doing, as he works for JLR (in an engineering capacity) and I am pretty sure built his car in record time with his eyes closed. His kit arrived after mine, but he managed to complete way before. The kind of guy who seems to get up at 5am and put in 3 hours build time before even going to work. far too committed for me, and although this kind of behaviour is normally a warning sign that you have just met a looney, he actually appears quite normal. He may read this, hence my cheekiness. Helped me a lot by sending pictures of random parts and assemblies, and only ever took the piss when I tried to fit the hub carrier the wrong way around… I would have been worse if it was the other way around…

Simon Calvert, met on Facebook, appeared to be friendly with Dan prior. So transpires that either Dan or Simon is the male equivalent of “single white female”, as they are copy cat 420R build mates. Slightly less scarily mechanically robot like with his build performance, but equally helpful. I’d like to think that I’ve had moments where I’ve helped him out too! He also completed his car before me, but all of the above are in a wait state for IVA test right now.

I met Craig Bramley at a L7C intro to sprinting day in 2010 and we have been really good friends since. He and Paul Browne (an even older mate, met through Salsa dancing with his wife!) are top notch friends and both have helped me out during my build. Both were here to help with the engine, and then on and off throughout both have been here for me for other build work. Thank you both so much, love you dearly, as you have made the journey much more sociable and fun, and all the hard bits were easier shared!

I raise a beer to the other guys, let’s hope we all get through IVA soon!

Can’t wait to be back on track with Craig and Paul….

Addendum: Steph, my wonderful wife read this and reminded me of her assistance. She mopped my brow, listened to general ‘man chat’ (very tedious) and made many cups of tea. Also fed and watered Craig and Paul when they came around. Much love to her xx 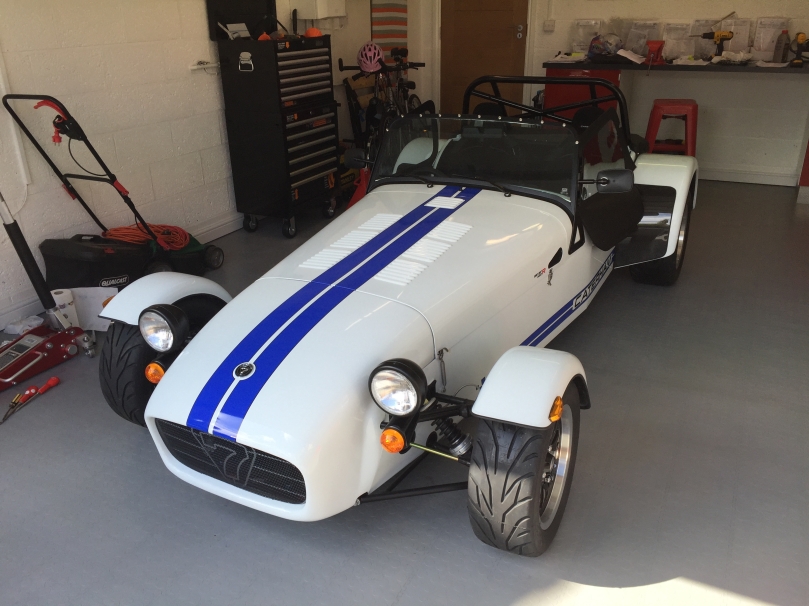